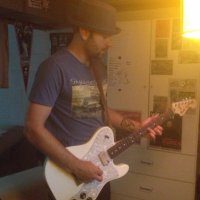 A) What a great great song.

D) I would love to hear the studio edit without a fade-out! Why do some many great rock songs fade out and not end properly?!